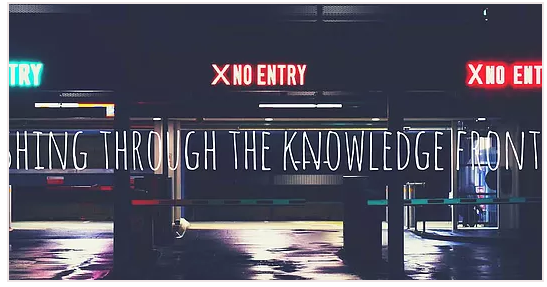 Failure is actually when we push blindly toward unlimited potential but our progress is rudely interrupted by an invisible wall we call the knowledge frontier. Beyond this invisible wall is the unknown, untested and unproven. To push beyond it is easy; all it takes is willpower. Successfully charting a course through the darkness requires more than willpower, it requires experience. Roads fork and you’ll have to make choices about which direction you should take to succeed in this unknown knowledge wilderness. Unfortunately failure means returning to the starting point but if you have already pushed through the invisible wall on previous occasions you’ll know which roads lead to failure. The more you fail, the more you learn which roads you should not go down. If you think about it, every industry embraces failure (or at least they should). When planes crash there is an investigation, findings are presented and safety improved. When a terrorist attack on a civilian population occurs, governments increase efforts to find ways to better protect their citizens. When sporting teams finish on the bottom of the season ladder after expecting to do very well and play in the finals, there is a review process, changes are made and the club often transitions from being a laughing stock to well respected serious contenders. Innovation is what companies look for and the source of innovation is failure.

I remember reading an article some months back where James Dyson, the famous inventor and entrepreneur, was being interviewed by Wired. They wanted to know the secret to his success and his answer was a simple one – learn to fail. Unfortunately most people he claims don’t know how to fail because failure is strongly discouraged by the western education system. When we’re at school if we fail we are considered to be failures ourselves. This is an obvious fallacy because as we now know, failure is the source of innovation and dynamic change. If we are not failing then we are not improving and we become stubbornly stagnate. As a finance professional you do not want to be putting yourself in a position where you have become stagnate and irrelevant. Business is a dynamic environment so staying on top of change is a critical priority. Many companies are just too risk averse to tolerate failure such that they actively discourage innovation (which does great damage in the long run when a competitor enters the market ready to challenge long held truths and assumptions). There are some well proven strategies for learning from failure which I will outline.

First of all, understand that not all failures are created equal. Some failures are blameworthy if they are the result of employee deviance or working outside predefined boundaries, policies and procedures or if it is due to the employee not paying close enough attention to their area of responsibility. Types of failures which can be considered praiseworthy include instances where the employee makes reasonable assumptions about the future but those assumptions turn out to be false resulting in some sort of a loss for the business or where decision makers are testing a hypothesis and asking the market a question such as “Is my business idea viable?”. What separates a good failure from a bad failure is whether or not failing has added to an existing knowledge pool. As I mentioned earlier, think of the fork in the road and not knowing which direction to head down. Failing doesn’t give us the knowledge to know which road to take which will lead us to success, but instead it will inform us which roads are closed.

Avoiding the blame game for so called “good failures” begins at the top. If you are managing a team cultural change is important to ensure your team feels comfortable testing hypothesises pushing boundaries and driving innovation. For example, making the transition to a new accounting system is a risky venture due to the fact the entire business as a whole might have become rather accustomed to operating under the previous system. Tackling a steep learning curve could set the business back if the staff using accounting systems actively resist the change or are simply overwhelmed by the complexity of it. If this occurs it’s critically important to avoid laying blame for taking the risk to implement a new system. It’s easy to say with hindsight “if it aint broke why fix it?” – it’s harder to say “Ok, so it didn’t work, what have we learned?”. The ideal work culture you want to foster (if you find yourself managing a team) is one where reporting problems and failures are applauded not punished. Many employees within organisations are extremely reluctant to accept they have done anything wrong and operate on assumptions that everything is running smoothly. Often it’s these minor failures which overall build up to create a wider problem.

If you are aware of anyone open to new opportunities, please feel free to contact Steven Lane at Abacus Human Capital on (07) 3135 9780.